Facebook Twitter Email
Meet Twenny. Twenny is a Scout's Honor alumni, who ended up back with us under sad circumstances. Twenny was adopted from SHR 8 years go, but was recently found roaming the streets by a concerned citizen. Sadly, he was not alone, but was found with another dog, JoJo. The people that found them took them to Citizen's for Animal Protection (CAP) to be scanned for a microchip. CAP discovered that Twenny was microchipped and that he was a former SHR dog, and JoJo was a former CAP dog that was adopted about 7 years ago as a puppy.
CAP contacted us about Twenny and said they had not been able to find his owner and asked if we knew. We tried to locate his owner as well but were unsuccessful. CAP also tried to locate JoJo's owner but were unable. Because the two are so bonded, CAP released JoJo to us because we do not leave family behind!
Twenny is a super sweet dog that knows some commands and just wants to be loved. He is in good health and is heartworm negative. He is an Australian Shepherd mix, about 50 lbs and 10 years old. You can tell that he is sad since he lost his home of 8 years and doesn't know what is going on. Please give Twenny a chance
Visit www.scoutshonor.org for more information 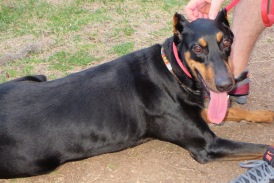