Fenris is a goofy guy! He's only about 2-3 years old and and he loves loves to play fetch!

Fenris was rescued by us along with his two other friends, Astrid and Grendel. Astrid and Grendal have been adopted but Fenris is looking for a family to call his own.  Fenris is the baby of the group. Fenris loves to play fetch and will chase a tennis ball for as long as you are willing to throw it. He is young and still working on his basic training skills but would be a great fit with someone experienced with the breed and willing to dedicate the time.  A home without kiddos would be best for this big boy.  He is just not comfortable with kids' fast movements.
Fenris does well with other dogs with proper introductions and would do great in a home with or without other dogs.
Fenris weighs about 95 to 100 pounds. Please consider letting him into your home and giving him the home he deserves.

If you are interested in fostering or adopting this sweet boy, please complete the app at www.scoutshonor.org. 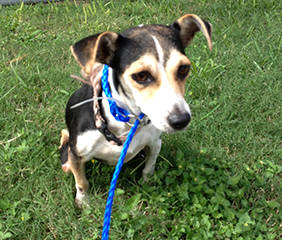