Meet Brock!
Brock was turned into BARC along with his sister Tina. The owner stated that with the difficulties of the pandemic, that he could not keep them even though he had had them since they were pups. When we heard this it broke our hearts knowing that they went from the only home they knew since they were puppies, to a scary windowless run in the shelter. The shelter staff said that Brock was friendly and well tempered. When we got there to see him, he just wiggled his bottom constantly and wanted pets and attention. While we had him out he met a pit bull that was walking by and he was great. He did not growl or bark, but just wiggled his bottom more and went up to greet the other dog. He rode great in the car to the doggy boarding facility where we took him, but a couple times just wanted to get in the driver's lap and get attention.
Brock is a big boy and weighs close to 100 pounds, but he is not overweight. Brock is just a big ball of sweetness. He's about 3 years old.  When you look at Brock's pictures, you will notice some patches of bright white fur on him. We haven't had him checked out by our vet yet (he's going next week), but it looks like he has vitiligo. This is not a problem and will not affect him in any way, other than making him look unique. Please give this handsome, and unique looking, boy the home that he wants so bad - forever.
Tina has already landed a fabulous new home so now it's Brock's turn!  Let's get him a home!  Please complete an app at www.scoutshonor.org. 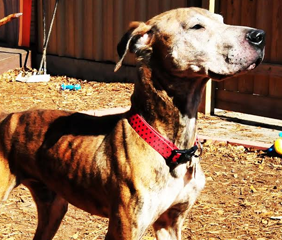